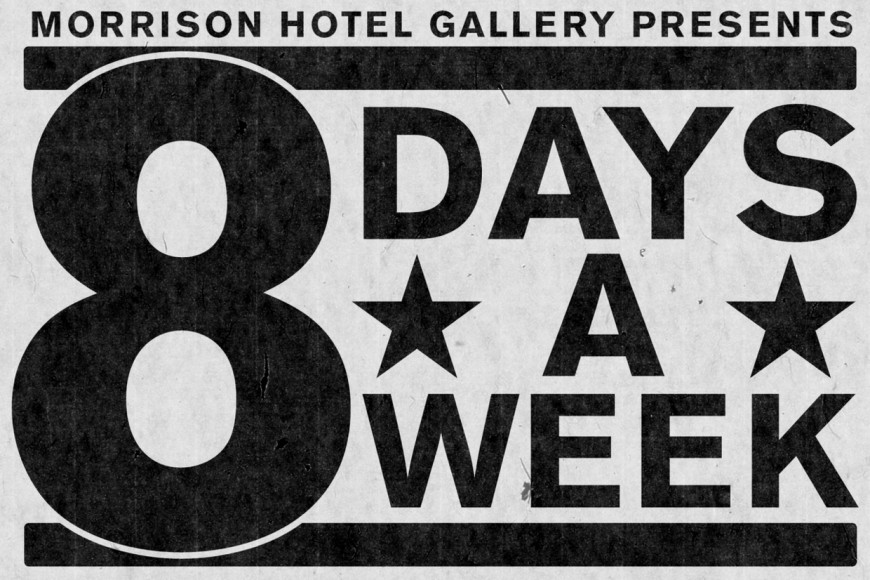 In Celebration of the Film Premiere of

The Beatles: Eight Days A Week – The Touring Years by Ron Howard

Eight Days a Week: The Beatles in Photographs

Without a doubt, the Beatles are one of the most iconic bands in rock and roll history. Over the years, much has been said and written about them, and the mythology behind their legendary status inspired director Ron Howard to begin work on The Beatles: Eight Days A Week – The Touring Years, a film that focuses on the Beatles’ touring years from 1962 – 1966. Following them from their time as fledglings performing in the Cavern Club all the way through their final, monumental concert in San Francisco’s Candlestick Park, The Beatles: Eight Days A Week – The Touring Years gives Fab Four fans a peek behind the scenes, as well as a front row seat to their most memorable shows. The film will premier in theaters on September 15th before being released on the streaming service Hulu on September 17th.

Morrison Hotel Gallery will celebrate the film release with Eight Days A Week: The Beatles in Photographs, an exhibit and sale of images September 12th thru the 20th featuring photographers who worked closely with the Beatles over the touring years. Many of these images are also included in the film. In Morrison Hotel Gallery in SoHo and West Hollywood, fans can experience these photographs in person, providing a look at the Beatles in the middle of electric performances in packed arenas to images of them happily goofing off in front of the camera or relaxing at the hotel.

To celebrate the film’s release, Morrison Hotel Gallery buyers and email subscribers will be treated to eight days of Beatles photographs from September 12th thru the 20th.  To join this email list, subscribe at: www.morrisonhotelgallery.com

All images are available for purchase at the gallery and through the Morrison Hotel Gallery website, click on “catalog” to see all photographs:

http://bit.ly/2cq7iZn
The legendary photographers featured in this exhibit are:

Lynn Goldsmith’s multi-award winning work has appeared between the covers of Life, Newsweek, Time, Rolling Stone, Interview and People magazines among others. She has released numerous books and her iconic images have graced hundreds of album covers. Her work has been shown in museums and galleries worldwide. Goldsmith first photographed the Beatles two days after her 16th birthday when they arrived at the Deauville Hotel in Miami on February 13th, 1964, to perform on the Ed Sullivan show.

Curt Gunther first met the Beatles while they were touring in Europe and was invited to accompany them to the US as their official tour photographer. During this time, he traveled with them, lived with them, and was able to document their lives in the glare and frenzy of the spotlights and screams, as well as in candid moments behind the scenes.

Emilio Lari specializes in set photography, which is what led the Italian photographer to work with American director Richard Lester on the set of the Beatles’ film Help! He has shot over 140 films.

Terry O’Neill has had his work displayed in galleries throughout the world and has photographed political icons such as presidents and prime ministers, as well as pop culture legends. He photographed the Beatles before their meteoric rise to stardom. O’Neill’s work has been featured on movie posters, as well as album covers and fashion plates for top designers.

Ken Regan was born in New York City and used the city as backdrop and subject as he honed his skills as a photojournalist. He shot the Beatles during their very first trip to NYC. Regan’s work has appeared in a long list of publications, among them Time, Sports Illustrated, Rolling Stone and Newsweek.

Rowland Scherman has made photography his life’s work for over fifty years. Traveling the world, he was the first photographer for the Peace Corps starting in 1961. He photographed the Beatles on their first US tour in 1964. Over the years, his work has been published in Life, Time, National Geographic and Playboy, among other noteworthy magazines. He received a Grammy Award in 1968 for Best Album Cover for Bob Dylan’s Greatest Hits. That same year, he also won the Washington DC Art Director’s Award for Photographer of the Year.

Charles Trainor worked in Miami during the 1950’s and on through the 1970’s. He photographed icons such as John F. Kennedy, Elvis Presley, Muhammad Ali, and the Beatles. His photographs became iconic in and of themselves, and his work has been published in Life and Look, Sports Illustrated and Rolling Stone.

Robert Whitaker happened to meet the Beatles on their 1964 Australian tour when he accompanied one of his journalist friends to an interview with the band’s manager, Brian Epstein. The photo he took during that meeting resulted in Epstein offering him the position of staff photographer at NEMS, where he worked with all of the artists. During his time working with the Beatles, Whitaker became extremely close with the band, photographing them onstage, as well as in quiet moments at home.

In addition, this exhibition and sale includes photographs from renowned photographer collector and Beatles photographic archive specialist, Vincent Vigil. Among his incredible collection of Beatles photography are two signed prints from Linda McCartney, which started his immense collection, as well as 30 transparencies from the film, Help! Many modern prints, taken from their original source, now reside in the permanent collection of the Rock And Roll Hall Of Fame + Museum. These images have also appeared in several books, magazine articles and exhibits.

Morrison Hotel Gallery is the world’s leading brand in fine art music photography representing over 100 of the world’s finest music photographers and their archives. The vast catalog of photography encompasses jazz, blues, and rock imagery spanning several generations through to today’s contemporary music artists and now includes iconic photographs in the world of sports as well. Morrison Hotel Gallery has a robust online presence, featuring over 100,000 images searchable by photographer, music artist, band or concert. www.morrisonhotelgallery.com