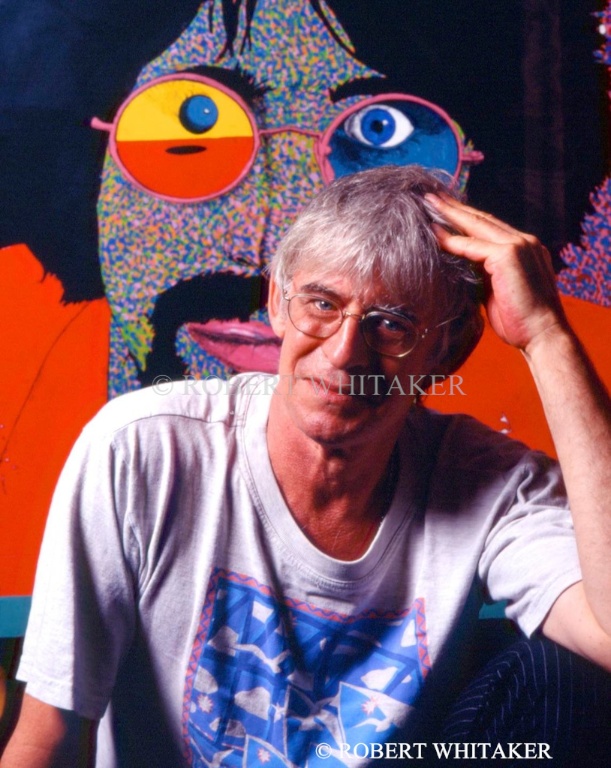 It is with great sadness that we have heard of the passing of Bob’s great friend and collaborator, Martin Sharp.  Martin passed away in Sydney after a long illness. He was aged 71.

Bob and Martin lived in the same building in Australia in the early 60’s, before Martin moved over to the UK.  Martin, an incredible artist had been creating quite a name for himself.  He was instrumental in creating Oz magazine.

Oz Magazine was a scandalous magazine and a major part of the 60′s underground scene. It was considered a psychedelic Hippie Magazine and very anti-establishment by many, although it was much more than that. The magazine was first published in 1963 in Sydney, Australia and then later 1967-1973 in London, England.

In 1967 Robert Whitaker was living in “The Pheasantry” on the Kings Road, London. “The Pheasantry” was a melting pot for many influential artists of the time. Martin Sharp, a good friend of Robert’s came from Australia with Richard Neville, and Martin lived with Robert once again.

Martin Sharp had been experimenting with many new colour techniques, and was creating a visually stunning publication.

It was in 1967 after Bob’s trip with the Cream  (Band) that Bob recalled, “Cream were going to do a tour of the north of England and Scotland. I just jumped in a car. Various things presented themselves to us on our journey around Scotland, none of which I could have recreated in a studio. I was very lucky that Martin had discovered day-glo paint. I had all the pictures, which I knew were for some form of publicity. I made a whole series of colour prints and Martin just started cutting them up – much to my annoyance, because they weren’t cheap to do. He then laid them out on a 12-inch square as a piece of finished artwork and then painted all over it.”

Our thoughts and prayers go out to Martins friends and family.